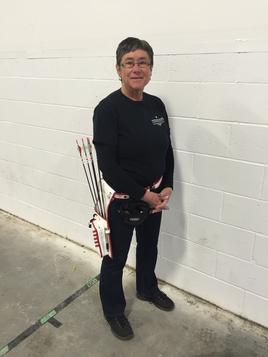 Jude Hooey is a retired teacher from Lethbridge, AB, Canada, and is a certified NCCP Level III coach with Archery Canada.  Jude has been coaching archers from beginner level to International levels for over 20 years.  She coaches archers in the disciplines of target, field, and 3D.  In 2007, she and her late husband, Dennis, were inducted into the Lethbridge Sports Hall of Fame in the athlete category.  In 2015, Jude was awarded the Archery Alberta Coach of the Year honour.

As an archer, Jude has competed in five World Archery Championships - two Indoor target, one Outdoor Target, and two 3D championships.  She currently holds 30 National target records, one of which was set in 2001.  She has won many Provincial and National Championships in Indoor Target, Outdoor Target, Field, and 3D (both Indoor and Outdoor).  For eleven consecutive years, she won the Gold in her category at the Archery Canada Indoor 3D Championship.

Encouraging her athletes to utilize this very effective system is a priority.  She believes that, with dedication, every athlete will benefit from its use.